skip to main | skip to sidebar

Yey!!! I had a really fun, productive day today. Well, not too fun as I was still constantly reminding myself that I needed to get a job already. But at least the hours thinking about it have been drastically reduced by my sewing projects which I enjoyed doing. And looking back and taking pics, I realize I was able to do a lot! Oh and by the way, I went to Taytay yesterday where they sell fabric leftovers - aka retaso - and I was able to find some. I won't say they are great ones but I then it can get me a long way with the projects I want to do for now. And the retaso is much much cheaper than having to buy per yard which is usually too much for some of the small projects I want to do. So for now, they will do.
First though, I want to show off my sewing nook at home, actually I have in a room that only I use and it has with it a bigger table and the heat press for our soon to be tshirt biz.  But here is the special nook for my sewing machine. Its a bit hot in this room, but hey, its summer! 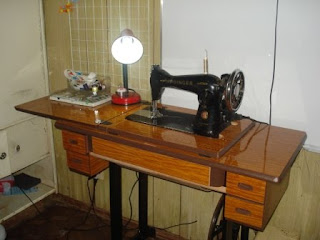 Ok, one of the sites I saw (sorry, have to look for that link again) had this cute pattern holder, but I prefer to call it a reminder nook instead. Its made of wood inside, which I lined first with duct take (don't ask me why, its just something I wanted to do to avoid splinters), and then with the black printed cloth which instead of gluing which I saw in the website, I stapled with a staple gun. I then placed the clothespins in cute designs (something I bought in Divi last Christmas) by glue gun. I placed it above the whiteboard because there's no other place for it the room, and it would be hard to put holes in the wood walls. 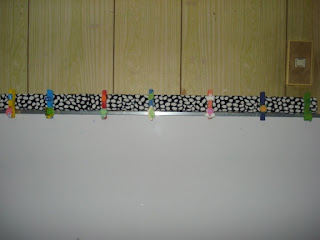 Here's a closer look with the clothespin designs: 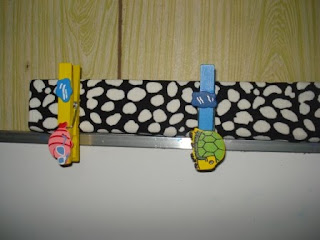 Next I was able to make 2 throw pillow cases of the cloth I bought yesterday. They are matching black and white. I'm thinking of making other throw pillow casings the same way but I'll need to buy more cloth first. This will do for the meantime.:-) 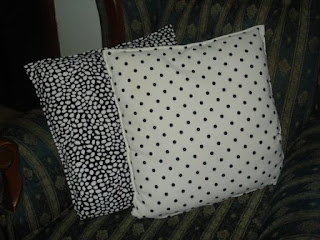 Finally, I was able to make a new stroller cover for Baby Alive. I made some changes because of availability of materials and because I wanted a reinforced one, and i think it was really good. 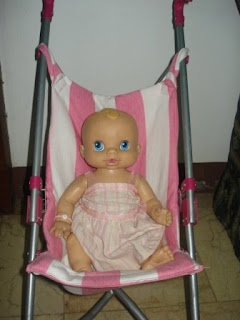 Here's the original one. 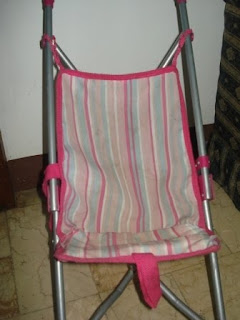 And here's my finished product. 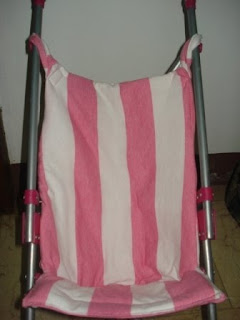 Nice eh? I still have a number of projects I want to do, and hopefully I'll get a good many things done before I get tired and stop. My biggest project and one I hope to actualize is the cover of the sofa, but that's a pretty big challenge so I won't post it till its done!
Posted by jenn at 6:28 AM

jenn
30-ish, a mom, wife, full-time career woman, part-time entrepreneur, daughter and sister. We all have many roles in life, and its a never-ending struggle to balance everything. But all these are gifts that we must be thankful for. And at this stage in my life, I truly am thankful for all that I have.